Our coordinator was way ahead of us and met us from the bus to walk us into the grounds of the children’s centre, through the front gate and along the temporary pathway.  Is that an old toilet bowl just there on the ground?

As I looked up from the MDF sheets laid out in the mud ahead of me, I began to take in the sights.  Two separate buildings stood within the fenced area, a concrete yard and a small grassy field just beyond it.  The yard and the field were strewn with rubble – Tyres, wood, stones, building blocks, rusty buckets and tin cans.  At each end of the field was a set of goal posts.

Two geese were roaming the yard to my right, and a small coven of ‘mature’ women were settled around a pot on an outdoor stove.  Chopping, adding, stirring.

One or two smiled and greeted us as we passed them, some of the older ladies paid us no attention and continued about peeling their vegetables.

We were taken to an office at the far end of the larger building. 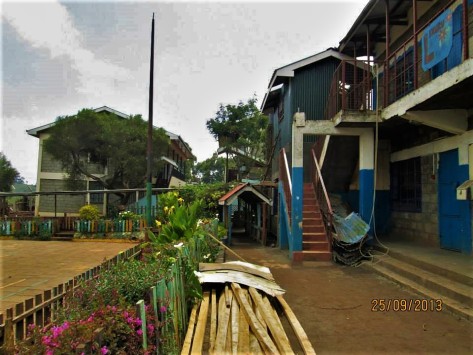 After depositing our bags and cameras and a brief welcome from the two ladies in the office, we were escorted to the second building and up the stairs at the side of the building (The furthest grey building in the picture above).  Entering the room on the first floor from the balcony outside, we were met with a small classroom and about 20 tiny giggly faces smiling and waving at us from their desks.

Immediately at the entry to the room was a toy area, strewn with plastic and wooden toys, recognisable from my childhood and from my parents younger years.  They were an unusual collection of battered and chewed vintage pieces, with the occasional old McDonalds Happy Meal toy among them, along with well-loved cuddly toys and plenty of half complete pages from colouring books.

This small corner, combined with the desk space for approximately 20 children took up no more than 1/3 of the room, in the rest of the room were old wooden and glass cabinets full of books. Colouring books, activity books, reading books empty note books, how-to-be-a-teacher books, books, books, books!

If I was going to send anything over now as a gift to that classroom, it would be anything but a book.

Four years on and I can still picture exactly where each child in the class sat and can remember most of their names.

But more than anything else, I remember my name for that week…

Mzungu (pronounced [m̩ˈzuŋɡu]) is a Bantu language term used in the African Great Lakes region to refer to people of European descent. Literally translated it meant “someone who roams around” or “wanderer.  The term is now used to refer to “someone with white skin”.  The word Mzungu in Swahili can also mean someone who speaks English. A person in Swahili is Mtu and “English” in Swahili is Kizungu hence the combination of the two words to make up a word “Mzungu.”

The possessive kizungu (or chizungu) translates as “behaving rich”. However, in some areas, such as in Rwanda and Burundi, it does not necessarily refer to the colour of one’s skin. Traditionally, Europeans were seen to be people of means and rich and so the terminology was extended to denote affluent persons regardless of race. It would therefore not be unusual to find any employer being referred to as “mzungu.”

Want to start at the beginning? Try Part 1 First!